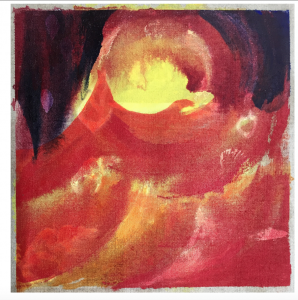 Gayle Forster has been a practising artist for many years, her first solo exhibition being in 1979. She has also participated  in many group and selected exhibitions. Her works are in the collections of Waikato Museum of Art, Christchurch Art Gallery, Lincoln University,  Aigantighe Art Gallery New Zealand and in many private collections in New Zealand, Australia, Japan, Canada, Spain, Switzerland, Brazil, England and U.S.A.

Her painting style derives from the traditional Japanese woodcut (in which she majored) with transparent layers of watercolour, oil, or print composed to suggest the history of the land, past, present and future. Expressive marks and emotive colours are used to reveal the ever-changing  features of the landscape and the effect of human intervention within the landscape. These are on paper, wood and canvas.

In 2016, Gayle completed a major commission called “Transitions” (size 1300mm width x 2800mm height). The theme of this commission is a response to the life cycle of the molluscs as they are broken down to remnants of their previous shell form by the tidal forces and the impact of the waves upon the Mangawhai coastline.

"Transforming",  2017,  her first major series since moving to seaside Mangawhai, explores  the way that water, in the form of a wave, builds up a momentum that becomes a surge picking up random fragments of rocks, shell and sand to toss them about, scour and reshape them and fling them to the shore. This movement of water, in the form of hot and cool colours also symbolises the way that the subconscious mind gathers random ideas, sorts and filters these for the conscious mind to consider. This mirrors Gayle's adjustment to living in a very different environment.

Several further series developed around the plight of the Pohutukawa tree, its strength and its vulnerability. Gayle returns to her roots as a child and uses this symbolism to explore  many different aspects of this iconic tree. The yellow void in earlier works becomes a protective circle,  coloured overlapping shapes  indicate movement through time and the introduction of words suggests the demise of this tree.

Her most recent series "Bird Stories" is her response to Lockdown 2020 and the pleasure the coastal birds, daily going about their business feeding, playing, defending, existing side by side, gave to her as she walked at low tide at Mangawhai's estuary. Life simply went on. In these prints, Gayle returns to the use of large white empty spaces to emphasis the positive shapes, a ploy used in her earlier prints executed after her return from Japan in 1980s, the copper wire birds adding another dimension. Limited edition prints available. 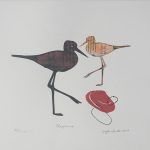 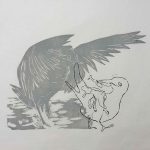 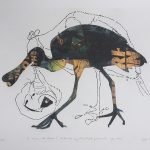 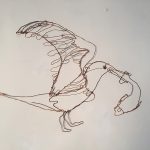 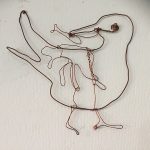 Gayle comments: "In both paintings and prints, the influences of printmaking and Japanese art aesthetics demonstrate a rekindling of my interest in the use of symbolism and spiritual content."

Gayle is also a member of the Mangawhai Artists.

One Woman exhibitions before 1991

Group exhibitions up to 1992

1991 November: “When We Were Young”, Salamander Gallery, Christchurch, New Zealand.

Awards and Fellowships up to 1991