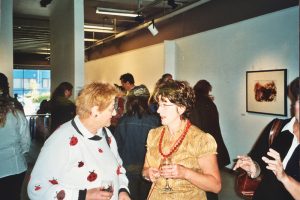 Its Sure to Rise emphasises the effect that both the natural and the ‘man-made’ have had on the Port and Banks Peninsula Hills. It was volcanic forces that gave rise to the hills in the first place, and their ‘rise’ is echoed in the high-rise of the city of Christchurch. Both the cataclysmic upheaval of volcanic forces beneath the earth, as well as the encroachment of commercial and residential buildings on the flat land below, has changed the landscape irrevocably. While the shapes of the rocky landscape of the hills reflects the geometric shapes of the cityscape, both hills and buildings are subject to change and movement, each with its own rhythms of construction and destruction. This raises issues and tensions about the relative permanence and character of the natural and the built environments.

These are the issues and tensions I have examined in my Its Sure to Rise paintings. They are to be seen in the exaggerated construction of the volcanic forms in which the upward thrusting landscape becomes a metaphor for the human construction of the built city. A further tension is evident in the intersecting diagonals that emphasise both motion and continual change. I have deliberately used hot colours – intense yellows and reds – to underline the fiery nature of the changed landscape of the hills and city.

Sponge, 2005, focuses on the cityscape that rises like a sponge – a light, open-textured cake made of flour, eggs, sugar, flavouring, but no shortening – at the base of the Port Hills. The weightless sky and clouds accentuate this and contrast with the rugged nature of the hills 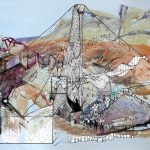 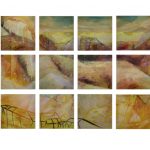 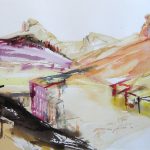